Today I came across an article on IGN that made me sit back and re-read a few times to completely grasp the information that was being portrayed to the general public. Now first up, this isn’t something that’s being written to cause a flame war or to put blame on IGN’s Editorial Staff or even state that someone is wrong. It’s merely my thoughts on how information was stated to the general public, and how my interpretation of this information says to me that what has been said is, for lack of a better word, wrong. Or at least wrongfully described.

As a little backstory, I have been a Halo Fanboi since the dawn of time, I own every Collectors Edition that game released, along with three of the Limited Edition consoles (1x Xbox and 2x Xbox 360) and have spent god knows how many hours in that game. Having said that, I’m also a HUGE fan of Sony Online Entertainment (SOE) and have played a LOT of PlanetSide 2 (I think I number near 2-300 hours now?), so I’d like to think I come into this with at least a little knowledge of both games and how both games work (but no, I won’t pretend to be an expert in either).

That being said, the comments provided from SOE’s president John Smedley to IGN I believe to be wrong:

[quotes]We believe that PlanetSide 2 is going to be the massively multiplayer Halo for PlayStation 4,” Smedley told IGN. “So we want to bring a completely new kind of gameplay to a completely new audience.[/quotes]

My biggest issue with this statement is that calling PlanetSide 2 the ‘massively multiplayer Halo for the PlayStation 4’ isn’t right. PlanetSide 2 is a great game, a HUGE game and is already a massively multiplayer FPS in its own right on the PC. That same format is being taken across to the PlayStation 4 system and PS4 users will get to have a shot at an amazing pure online FPS. But drawing the comparison to Halo? That’s where I believe this statement is wrong, the only similarities I see between the two is that they’re both FPS and that they’re both set in a futuristic setting and that, is where the similarities stop. 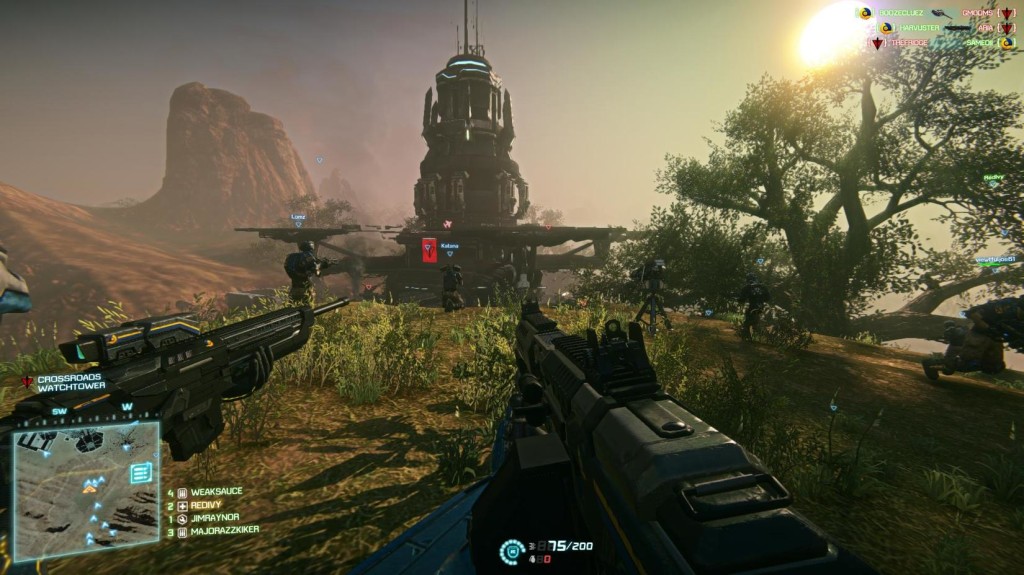 To delve into it a little further, you have Halo. A game in which is set around (for the most part) a group of ‘super soldiers’ created for the sole reason of the UNSC’s defence, whether internal (Insurrectionists) or external (Covenant/Flood). You then have the Multiplayer aspect which is essentially the typical flow of most online FPS, depending on the game type you play is depending on the game experience you get. Capture the Flag, King of the Hill, Big Team Battle etc. They all have different play styles and you don’t ‘have’ to play a certain one if you do not want. Then you have PlanetSide 2, a story revolving around 3 factions (New Conglomerate, Terran Republic and Vanu Sovereignty) all vying for control of Continents for their respective factions. All in a pure online setting full of thousands of players. The similarities between the two games are isolated to both being an FPS and both being a futuristic shooter.

Both are amazingly fun games in their own right, but I would not classify them as similar enough to label PlanetSide 2 the ‘massively multiplayer Halo for the PlayStation 4.’ What it is, is a massively multiplayer online shooter for the PlayStation 4 with an already well defined story and player base on the PC, what it isn’t is a Halo equivalent. If PlanetSide 2 were to be compared to anything, I would seriously consider comparing it to Titanfall, but even then the scale of PlanetSide 2 in comparison to already existing FPS games on the console is not even close to the same thing.

I highly appreciate SOE wanting to aim to attract an Xbox audience to garner further interest for PlanetSide 2 on a different console, but if you’re going to do so, don’t tell Halo players that the games are the same. It’s not going to work that way. And I am sorry IGN, but PlanetSide 2 isn’t a game involving territorial control wrapped in a Halo-esque sci-fi skin at all. You got half of that statement correct, the other half isn’t even remotely close.

Regardless of the above, if you’re getting a PlayStation 4 you would be silly to miss out on the opportunity to play PlanetSide 2 as a Free to Play game, it’s an amazing game that can be a hell of a lot of fun if you have a great group of friends to play with. Just don’t tell me it’s the PlayStation 4 equivalent of Halo. K?

Xbox Smart Delivery – How it Works and Games Confirmed

All The Announcements From The PlayStation 5 Reveal!

The Last of Us: Part II – Story Trailer

The Last of Us: Part II new trailer to drop tonight

The Last of Us Part Two – Review