Metro: Last Light is an atmospheric shooter. It’s intentionally slow paced, but it’s in these moments where things are most intense, you get that feeling in the back of your mind that this is building towards something. In doing so, the game strikes a great balance between action and horror.

Last Light – Developed by Deep Silver – is a sequel to Metro 2033 (released in 2010) and follows along the story of the previous game. After the nuclear war of 2013, the citizens of Moscow, Russia were forced to retreat to the city’s underground Metro train system to survive. Twenty years later, you take on the role of Artyom, a citizen of the Metro who was only a small child when it all started. Over the course of the first game, you fought against beings called the Dark Ones – mutated humans and animals who were exposed to the radiation of the war and never made it to the safety of the tunnels – as well as Soviets and Nazis to help protect the human population. This all leads up to gaining access to a missile silo that gives you the chance to wipe out the Dark One species for good.

In this game, you continue to play as Artyom who is a member of the Rangers (a military group who assists the citizens of the Metro tunnels). The rangers receive a report from someone who spotted a Dark One that survived the missile, and is currently residing in the remains of their former habitat, so Artyom sets out to find it. This sets off a series of adventures that sees you crawling through the dark and dangerous tunnels once again.

Last Light looks like a first-person shooter, but really the game splits itself into two distinct flavours – your typical run-and-gun FPS gameplay, and sneakier stealth modes. Most of the human enemy sections you can covertly make your way through, by taking out enemies one at a time or avoiding them altogether. This can be a good or bad thing depending on how you look at it. Usually these sections have a direct path that you must take in order to push the story, and the guards are just there to slow you down.

Normal difficulty seemed easy enough for the average FPS player. Ammo isn’t as scarce as you’d think and human enemies can be looted of their equipment. With that being said, I found myself scurrying for cover when being faced with multiple irradiated dogs that leap and claw their way towards you. In these encounters, you can’t just stand and fight, as the end result will be your entrails all over the floor – like the bodies around you. At one stage, I found myself up against a pack of dogs with only 2 clips of ammo in my last gun. Luckily, you can melee till your hearts content and by using that to my advantage I was able to get to the next town area safely and stock up on ammo there.

It’s in these unscripted, exploration sections where I had the most fun. You eventually get to a stage where you can traverse the metro at your own leisure, and this is where the game gets exciting. Each side passage is a new area to explore with more nasties waiting for you around every corner. These areas also bring out the horror style sections of the game, where creatures are crawling in the distance, and dead bodies appear in front of you before quickly vanishing again – like they never existed. Everything is out to get you in the Metro – you need to keep your flashlight charged and your magazine full if you want to stay alive.

During the first few hours, this unfortunately doesn’t exist, and you get stuck with one NPC or another that leads you between encounters, before conveniently dashing off and letting you take care of business. The characters themselves aren’t the problem, as they usually have some decent dialogue. Instead, you get that linear feeling, along with the constant hand holding that restricts the player from what the game is trying to deliver to you.

Each lighting and smoke effect looks amazing, with textures adding to the depressive theme that revolves around the game. Flame effects look especially good with the lighter burning through holes in the spider webs. Another great feature is the minimal HUD, which only displays your ammo count, and fades out if it isn’t needed. In turn, this leaves you and your gun to fight against the world. 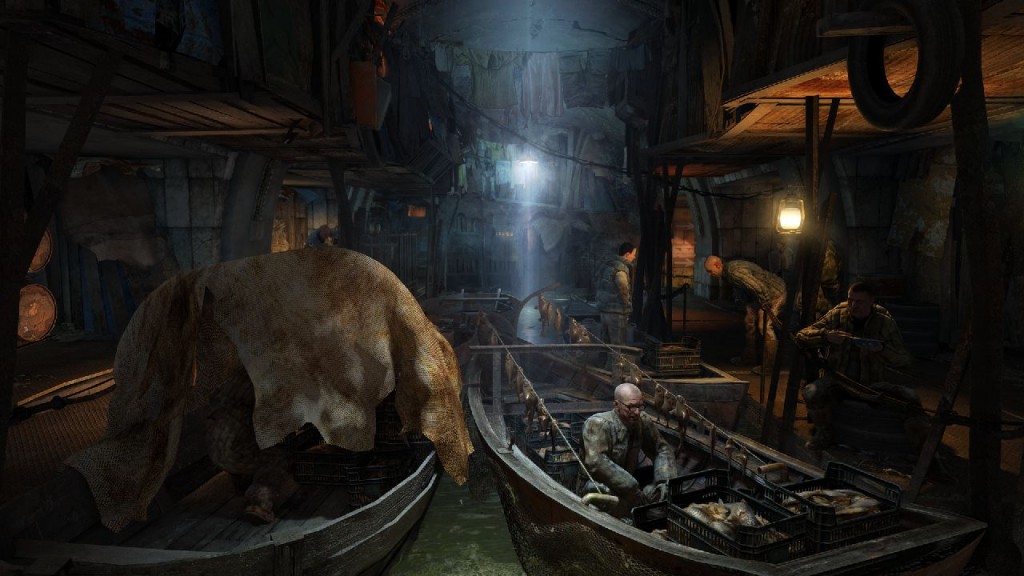 Just as a side note to people playing on PC. The menu’s and graphical options are very simple to say the least. There aren’t any advanced options like depth of field, exclusive full screen and FOV (Field of View) that really should be in there for PC gamers to tweak. With the claustrophobic nature of the game, it might be hard for people to play with the current FOV settings, but personally I didn’t have a problem. The SSAA setting should be turned off at all times as it chugged my 2xGTX670’s, but even without it on the game looks gorgeous.

Metro: Last Light is a great game with a great world attached to it. Everything from the lighting effects, to the simplistic HUD and weapon design keeps you immersed in the world. If they actually went all out and gave me more areas to explore before pushing the story, it would increase the gameplay even more. It really shines above other shooters, and for every tense moment there is always something lurking in the shadows waiting to get you. I highly recommend it for FPS fans and non-fans alike.

The Last of Us: Part II – Story Trailer

The Last of Us: Part II new trailer to drop tonight

Borderlands 3 is now on Steam and features PC Cross-Play

One Punch Man: A Hero Nobody Knows – Review