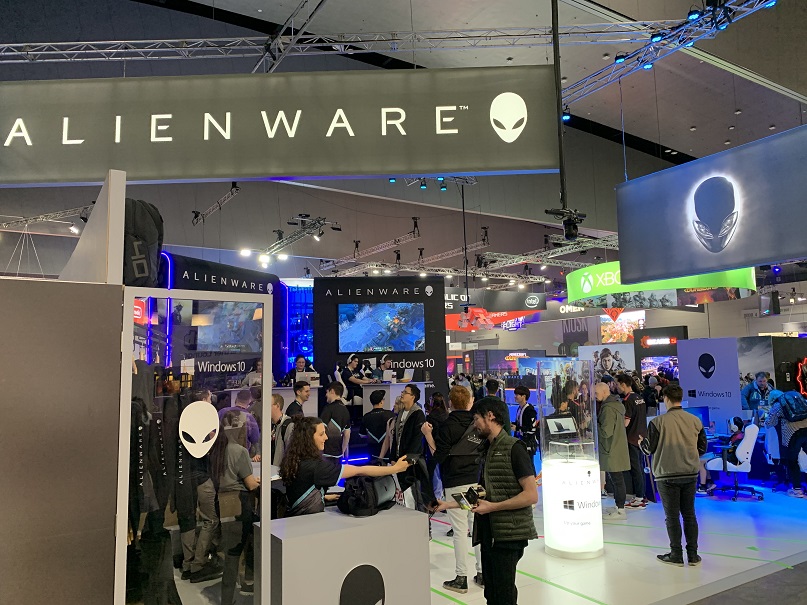 At PAX Aus 2019, we had the opportunity to chat with Chris Sutphen, the Global Director of Marketing for Alienware. While we were at the Alienware booth, Chris showed us around and explained more about their latest products, such as the m15, m17 and Area 51m laptops, as well as their new Aurora R9 desktop.

Have a read below as Chris explained further about the design of Alienware’s newest m15m laptop, as well as discussing more about their product lineup.

Thank you for joining us today, Chris! So, tell us a bit more about yourself.

Sure! My name is Chris Sutphen, I hail from Austin, Texas. I’ve been part of the Alienware team for well over 10 years. My particular responsibilities are that I plan and bring to market all of the Alienware, G Series and XPS desktops. I’m quite familiar with our brand journey, as well as other peripherals and notebooks and products as well.

So with one of your latest products, the m15 laptop, what are some new features that you can tell us about it?

So the m15 along with his brother, the m17 is the latest addition in Alienware’s thin and light roadmap. So if you rewind a little bit and look at the previous generation of products, we had a 13 inch, a 15 inch and a 17 inch. 13 kind of meant for portability, 17 kind of your big screen and 15 that is the Goldilocks kind of right in the middle.

Back at CES of this past year when we launched the Area 51m, our true desktop replacement, the bad boy with every type of innovation we can throw at it, that’s really where we kind of split our product line and we decided to have a desktop category replacement products. A notebook that would be our big halo, you know, something that we could find really true crazy innovation with and pushed the boundaries and limits of engineering. 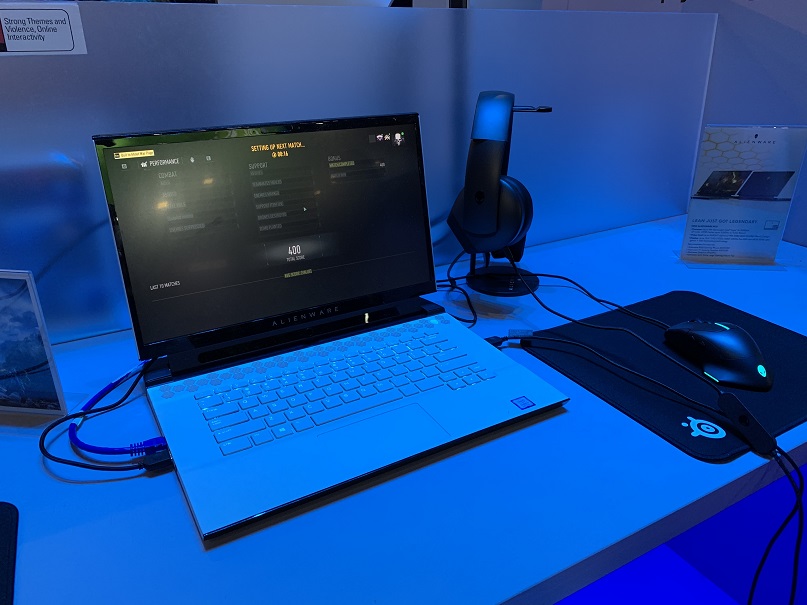 We also wanted to bring to market a thin and light and that’s where the m15 and m17 come into play. They truly are the balance of amazing gaming but true portability to the 15 comes in at just over 2.1 kilograms. So for us on the other side of the pond that was just under five pounds, truly a lightweight and we achieved that through the use of premium materials like magnesium alloys. Every piece of the product that’s made of a steel or a metal is a magnesium alloy to help us reduce that weight and get under that five pound threshold or 2.1 kilogram. From there though, we didn’t stop with the over-engineering of the product because Alienware wouldn’t do that. The three things we really focused on for this product was the thermal solutions, the keyboard, and then the screens.

So let’s talk first about the thermal solution. In order to get Alienware’s thinnest and lightest notebook, we had to really kind of think outside the box. In a normal product, the motherboard sits such that the graphics card and the CPU are facing up. They’re literally sitting underneath the keyboard and they make for some of the hottest points of the system. Now what we wanted to do was actually because of our keyboard design, we actually to flip that upside down. So if you tear that guy apart, the CPU and the GPU are actually underneath the system. But because these products are laptops and potentially be used on a person, we had to be very careful and cognizant of skin temperatures. And so that required a super efficient and highly affective thermal solution to go do that. So we over engineered the thermal solution. 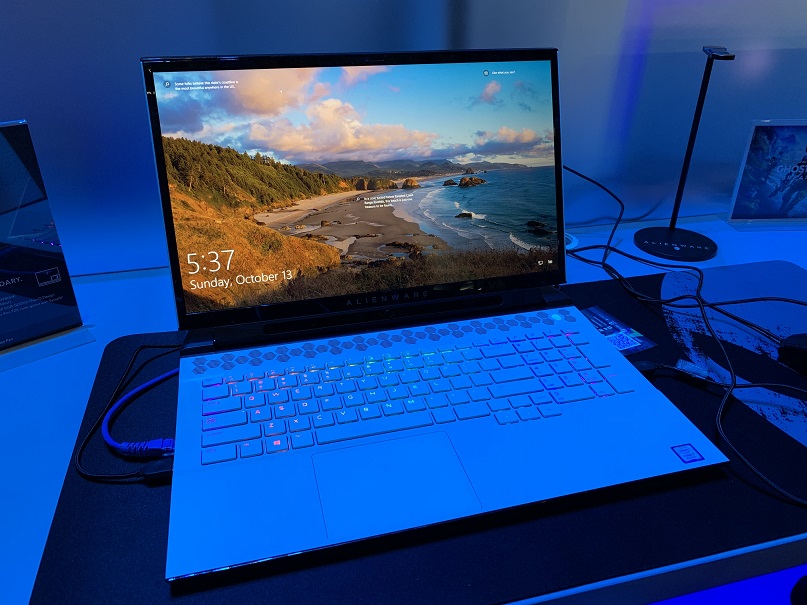 We increased the CPU fan by 10%, the GPU fan by 20%, and added 10 blades to each which really create a very, very, efficient cooling mechanism. The pipes are now made out of copper and zinc, which I think has some great thermal conductivity and just like copper but is a little more lightweight. So that helps for the portability. And then we actually added a sixth phase voltage regulator to the CPU and eight phase to the GPU. The addition of those voltage regulators, common by other standards are probably like four phase voltage regulators. The reason we go more in so that we can better dissipate the heat and the load of higher frequencies, knowing that you want to play your games at the highest settings, those processors, GPU and CPU are going to be ramping up as fast as they can.

So the six phase and eight phase help to go and smooth out the load balance so that our thermal solution can pull it a little bit more efficiently. Now the thermals don’t just stop with the fans and the heatsinks. Actually the Legend ID itself (name of Alienware’s current design scheme), helped paint a picture for how we can help cool the product. So on the top of the system, there’s a really cool hexagon pattern that’s part of our overall design language, but those are actually active vents. And so we use a fence venting that has an intake from the top and the bottom. So the bottom of the system has vents, the top of the system has vents, sucks in air, circulates it over the hot components, and then blows it out the sides and the back. And that’s how we achieve amazing thermals and going all the way up to i9 K processors and 2080 RTX graphics cards, the MQ versions of those graphics cards within such a small form factor. 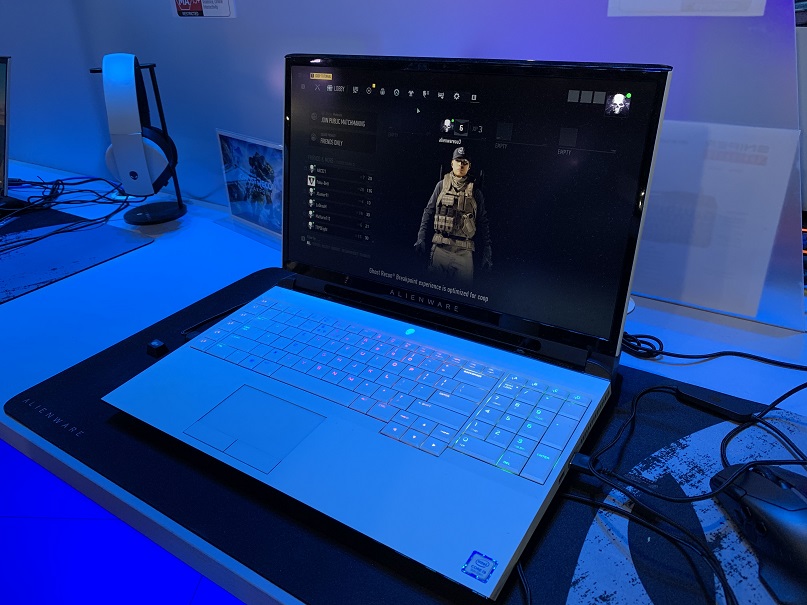 So looking back on the previous m15 that was launched last year, was there any feedback that you got from the community that has been incorporated into this model?

I think the biggest thing was around weight. So previously, we’ve really optimized and focused on performance, and I think the ability in the new m15 and the redesign of it was the ability to really go after that under five pound category. And so that’s really what we for that was the feedback that we heard that the previous one was portable but not portable enough. They (gamers) wanted more out of it, but they weren’t willing to sacrifice performance. So they said make it lighter but don’t take any of my gaming performance away from me. So challenge accepted and here we are.

Outside of the laptop family, what new developments do we have from the desktop side of Alienware?

So the exciting news that we announced just a few months ago was the update of the Alienware Aurora, which now has the amazing and beautiful Legend ID. So it’s kind of the culmination of all of our platforms now being focused and centered around that Legend ID, which for Alienware was meant to be, you know, a reinvention of what the gaming PC is supposed to look like. It was meant to leapfrog the competition and really start to push the boundaries of design within the gaming space. So we’re excited and where we landed.

The new Alienware Aurora has a couple of very cool things about it. One: form makes function. So the addition of the Legend ID to it, and the actual added venting that we actually improved upon the system, we’re able to reduce the internal ambient temperature up to 8%. So what that means for gamers is it’s going to run a little bit cooler. Your fans are gonna run a little bit slower. The longevity of your parts are gonna last longer, and your system will be a little bit quieter. So we’re able to achieve that – a great milestone for that product.

In addition, we announced that now across the Alienware line of products, we’re shipping it only with HyperX memory. So we have now a partnership with HyperX XMP. The ability for users to go in there, use Alienware Command Center to really fine tune and overclock that memory to their heart’s content. We love the partnership with those guys, they have extremely high quality memory. And now, every Aurora, from 8GB to 16, 32 and even 64GB, all have HyperX XMP memory. 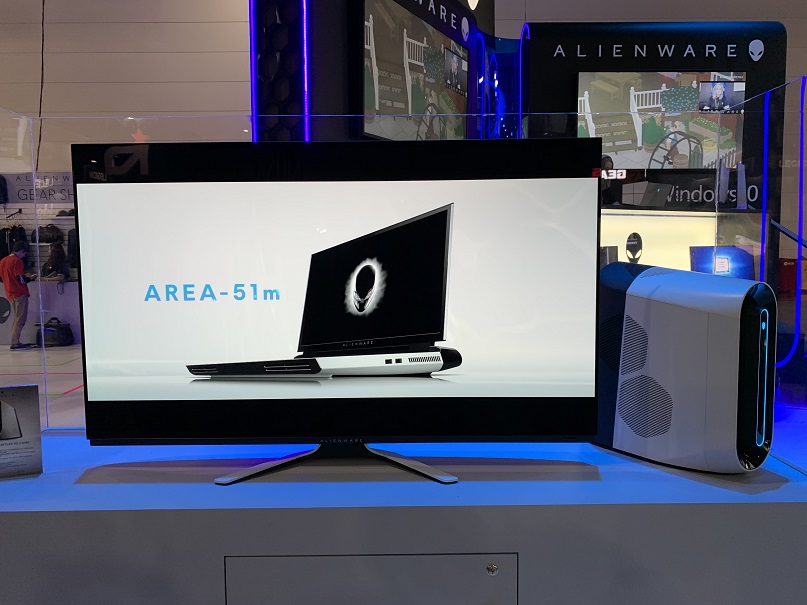 What are some new developments we can expect to see from Alienware in the next year?

Well now you’re asking for some teasers here! While I can’t comment on our future roadmap plans, I’ll tell you that we continue to push the boundaries of innovation. Stay tuned for some really cool announcements and sneak peaks at around the CES timeframe. That always gives us an opportunity to have to pull up our sleeves and show you guys a little bit what’s a behind the scenes. I think we did that last year with the Alienware 55 inch gaming monitor and we’re here showing it off at the stand. So stay tuned, there’s more coming. We look at this space, we know what gamers want. We continue to evaluate different products in front of the categories. And, we’re excited about the Alienware roadmap for the years to come.

Thanks Chris for the interview! Let us know you think about Alienware’s latest release of products. More information about the Alienware product lineup can be found on their official website.